Ladakh – A bit of history and geography

Little Tibet, the last Shangri-La, Moonland, Broken moon, Lamaland. Ladakh has been fondly called many names by countless travelers in the past.

One of these travelers, and chronicler extraordinaire, was a British gentleman by the name of Sir Alexander Cunningham. It was Cunningham who laid the groundwork for what was to become the Archaeological Survey of India. He visited Kashmir and Ladakh in the mid 19th century. In his notes, he mentions the earliest Chinese traveler to India, Fa-Hsien who seemingly referred to Ladakh as “Kie-Chha” during his visit there, circa 400 AD. “Kie-Chha” means a country where snow never melts and Fa Hsien described the natives of this country as “men of the snowy mountains“.

Cunningham also cites Hiuen Tsiang, the great Chinese traveler, famous for his 17 year overland journey to India, “..from Lo-hu-lo (present day Lahaul) to the north, for over 2000 li, the road is very difficult, with cold wind and flying snow; thus one arrives in the kingdom of Mo-lo-so, or Mar-sa, (synonymous with Mar-yul, a common name for Ladakh)”

However, it is these very characteristics – the rugged and unique geography, the barren land, and a climate that vacillates between unforgiving and downright inhospitable – that drive tourists and converts them into ardent devotees.

Ladakh is not your typical vacation destination. People have been known to have come down with sunstroke, altitude sickness or frostbite; for an unfortunate few, all three at the same time. In fact, the Ladakhis have a saying on the lines of, “Only the fiercest enemies and dearest friends will visit this land..”

Nonetheless, antithetical though the region may be to the idea of human life, life does abound in the fertile valleys irrigated by the great Indus and its tributaries, most notably the Shyok and the Zanskar. 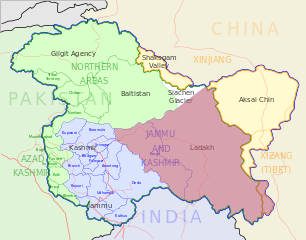 Historically, Ladakh also included the regions of the entire upper Indus valley, the disputed Aksai Chin region, the land closest to the unparalleled beauty that is the Pangong lake, and some of the southern reaches of the Xinjiang region.

Most importantly, it also included its picturesque cousin, Gilgit-Baltistan towards the west. A land equitable to the beauty of Ladakh, before wise leaders from millennial old civilizations decided to draw lines across it’s face. Skardu in Baltistan, by all accounts a very scenic place, used to be the winter capital of Ladakh at one point while Leh used to be the summer capital.

In a similar vein, the Chang-Thang plateau in Ladakh and some parts of Aksai Chin form the western face of what once was, the great Tibetan plateau. In fact, the landscape starts bearing a striking resemblance as one moves eastwards of Pangong Tso, and a cursory glance at the Tibetan plateau map reveals a beautiful speckled land, with numerous emerald green and sapphire blue lakes.

It is this proximity to Central Asia that turned Leh into an important center of trade during the existence of the ancient silk route. Even before people started writing about Ladakh, travelers from all corners of the world made Leh their base of exploration of Ladakh. Naturally therefore, so did we.

Eulogies and paeans have been written about the stoic, even cheerful way that Ladakhis go about their lives. Their food, warm with an extra helping of fat (do not miss their delicious Thupka and a cup of butter tea in the biting cold), goes well with their helpful, warm ways with visitors to their land. If you are lucky, you might even be invited to taste of the locally brewed Chang. All this hospitality however, is in stark contrast to the land they call home.

Think about it, they are born in a place where even the very air they breathe contains less of what is necessary to sustain life. Nobody knows for sure what makes their race one of the most hospitable ones on this planet. But without a doubt, a lot of the color in their lives stems from their Tibetan leanings and their devotion to Buddhism.

Many historians concur on the fact that Buddhism first came to Ladakh from North India, at a time when Tibet was not yet Buddhist. They point to the Kushana dynasty (1st century BC to the 5th century AD) and later, the 8th century AD under the rule of a king named Lalitaditya-Muktapida; as a time when Ladakh was influenced by Indian Buddhist teachings. Around the same time, Tibet came under an aristocratic ruler who displaced Buddhist Tibetan natives from Central Tibet. Onward they fled and settled in the western parts, carrying their language, religion, culture, beliefs, cuisine and architecture with them. (A fascinating account is mentioned here.)

Even after many tumultuous centuries of different rulers and numerous wars, the Tibetan influence permeates everything in Ladakh. In fact, it is probably in Ladakh that the Tibetan culture is closest to it’s own home and today, has tinged the land with a unique spiritual flavor that is touted as an exotic calling card by many.

Ultimately though, it is the spectacular, utterly bewitching vistas Ladakh reveals around every corner that continues to pull in people from all corners of the world. And no matter how many arguments are presented in favor of the spiritual way of life followed by its denizens, or their quintessential cheerful disposition in the face of uncommon hardships, or the feeling of peace, tranquility and boundless eternity that Ladakh exudes, it is all superseded by the magnificent beauty of the land itself. Nothing quite prepares you for the scenes that await you at the entrance to the roof of the world.

When you land there, do not forget to say Julley !

The following time-lapse video is not mine, but sharing it here for the benefit of all visitors.

Credit goes to India In Motion, what a fabulous job they’ve done !

Indebted to the following sources for their details on Ladakh:

And the following books

Leave a Reply if this post was helpful Cancel reply